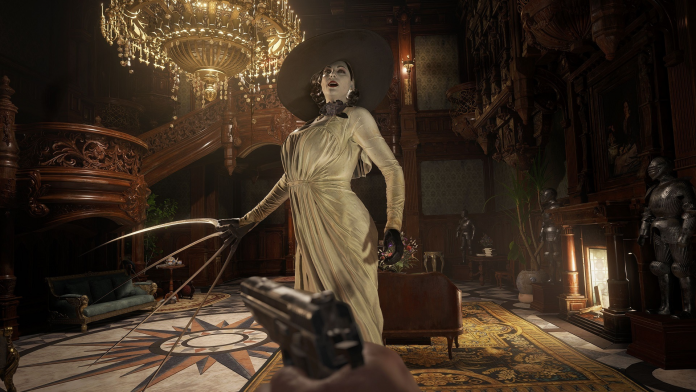 There might be only a handful of people on this planet who love zombies but don’t know about Resident Evil. Perhaps, the most popular game and movie of its genre, resident evil, is an undeniable force back with another creepy game edition. Resident Evil 8 sets out to branch off in its direction from its predecessor while keeping the core tenets intact throughout the gameplay. Developed by Capcom, Resident Evil 8 is a first-person survival horror game that revolves around our protagonist Ethan Winters, lost in an isolated village after a tragic incident.

The best thing about Village is that it explores various horror themes and almost feels like a horror anthology – an element somehow missing from the previous games. One can easily say that it is one of the scariest Resident Evil games to date. Apart from bringing back the scare, resident evil eight also sets a new series record. According to Steam Database, the latest game has topped 100,000 concurrent players, the highest for the series. According to other numbers, Resident Evil 8 is selling faster than the series’s best-selling game (Resident Evil 2). The game is undoubtedly a major next-generation release as disturbing as people would like it to be. Check out below the official trailer for Resident Evil 8: Village:

Our story picks up three years after the events of Resident Evil 7, and the scene opens with the same-old domestic bliss. We see Ethan Winters enjoying a quiet suburban life with his wife Mia and daughter. After Chris Redfield and Ethan rescue Mia from the Baker house, the duo restarts their lives and safely escape Europe. While the couple is dealing with the trauma, they endured in the place of horrors/monsters/zombies, Chris and his team suddenly bust in and take Ethan and his daughter Rosemary away. We then cut to a car accident, after which Ethan finds himself alone in snowy woods with the special forces guys who were transporting the dead and his child missing. Ethan wanders off to a seemingly empty village, but it turns out that it is about to be ransacked by a pack of werewolves.

That’s the first big challenge in Resident Evil 8; surviving the onslaught of the Lycans who shoot arrows and other weapons. The creatures can completely overwhelm you if you don’t find guns or create barricades. Whether it feels like a slow burn or not, but the combat will make your heart pound. Coming to the Village’s build, it’s a shabby, scrappy, and creepy settlement with an occasional church, farmer’s fields, and wooden houses. The atmosphere is menacing, and there are traces of ancient ruins, and well, it is also dark. If we talk about one of the eeriest scenes from the game, it would be the mansion of the dollmaker, Donna Benevento. The whole dusty house is full of black-eyed dolls, while this may be the time where you’ll witness some spine-chilling tense horror. Check out the video here:

What did we think of Resident Evil 8?

Resident Evil Village is available on PS4, PS5, Google Stadia, Xbox Series, Xbox One, PC, and Steam. You can buy this fantastic action-adventure survival game for $59.99, while the deluxe edition is available for $69.99). For Resident Evil 8, we can say that it breathed new air into the franchise, especially for genre lovers. The best thing about the game is that it does not follow a straightforward design. Instead, it explores different settings, and you are left with something new every time. Each villain is the other, their lairs are different, and you’ll be left breathless trying to survive against overwhelming enemies. The various set pieces connect. One of the better things about Village is that it offers well-fitted resources to fight brutal enemies, unlike in RE7, where you used to run out of bullets before the enemy hit the ground. Even though sometimes RE8 may feel like a mixtape of a dozen different horror games, it delivers what the people want. The game has an element of its own that will entertain players for years to come.

Many may have considered Resident Evil a dying franchise, but Village brings back that slow-burn yet action-packed horror fest that many believe this series delivers. The game has broken records as the fastest-selling and racking in over 100,000 concurrent steam players at its launch. You can quickly call Village one of the best games of 2021.

Alienware Aurora 2019: All You Need To Know

What does the Star Level do in Clash Royale?